In Magnetic Particle Imaging (MPI) small superparamagnetic particles are used to acquire functional images from an organism. These particles are like small magnets and can be aligned by an external magnetic field. The resulting magnetization changes nonlinearly with the field strength, which can be seen in the figure depicting the Langevin function.

If the magnetic fields are sufficiently large a saturation effect occurs. So by using an oscillating magnetic field particles flip from one saturation state to the other and a small voltage in a receive coil is induced. In the first MPI scanner presented in 2005 in Nature, two opposing permanent magnets are used to saturate all SPIOs by creating a strong gradient. Only in a small area, the so called field free point (FFP), the particles are arranged randomly and the magnetization is zero. Additional coils move the FFP fast enough over the sample that the particles in the vicinity of the FFP flip from one saturation state to another and therefore a voltage is induced.

The particle concentration correlates with the induced voltage. By knowing the exact path of the FFP in the sample an image of the particle distribution can be reconstructed.

Here at Würzburg we developed a different MPI setup. The approach is called Traveling Wave MPI, because the gradient for saturating the particles is not static, but moves like a traveling wave as can be seen in the schematic of the traveling wave scanner.

The TWMPI scanner as shown in the picture works with a novel gradient design, the dynamic linear gradient array (dLGA), which can generate and move the required field free point linearly along the symmetry axis. 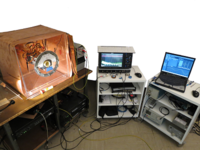 The dLGA contains 20 single copper coil elements, which can be driven individually. With this configuration it is already possible to acquire a one dimensional image of the sample. Two additional coil pairs create homogenous magnetic fields, which enables two- and three-dimensional measurements. Our setup works without permanent magnets and is capable of 3D imaging with acquisition times smaller than one second. A press-article on our TWMPI system was recently published on MedicalPhysicsWeb.

For now Magnetic Particle Imaging is mostly used in physical and pre-clinical research but there is high potential for clinical applications.