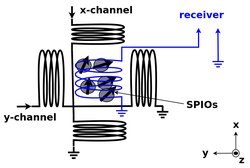 In addition to our work in the field of conventional MPI based on the non-linear magnetization behavior of magnetic nanoparticles (MNPs), we are developing a new relaxation-based method for the highly sensitive examination of the properties of MNPs in liquid suspension. This method called rotational drift spectroscopy (RDS) was presented for the first time at the International Workshop on Magnetic Particle Imaging in 2014 by our group. 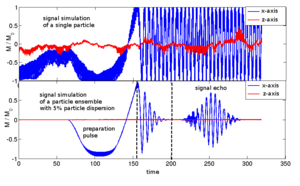 RDS measures the transient magnetic response of magnetic particles in the rotating field after perturbing the system, e.g. by applying a short uni-polar field pulse, which aligns all particles simultaneously at the start of the measurement. The alignment of the particles after the preparation pulse lasts only a finite time due to rotational diffusion and to different rotational drift frequencies among magnetic particles with different properties. The latter effect can be reversed by switching the rotating direction of the rotating magnetic field, resulting in a signal echo.

As the RDS signal highly depends on the properties of the MNPs as well as their interaction with the environment, it could be used to detect the binding of functionalized MNPs with e.g. proteins, viruses or cells with potentially very high sensitivity.