Upon primary energy consumption a significant amount of waste heat at moderate temperatures of around 100 °C is generated. Regarding recent efforts on sustainable, environmental-friendly energy sources is it thus of utmost importance to take advantage of these losses by means of thermoelectric generators (TEGs) which directly recover waste heat into electric power. In contrast to well-established inorganic TEGs, mainly based on doped Bi2Te3,, organic van-der-Waals bound semiconductors constitute a promising alternative material class for next-generation, low-cost and green-technology TEGs. 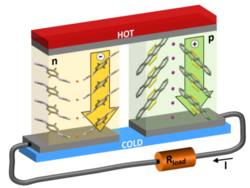 We aim for this approach by methodically combining suited organic acceptor and donor materials to optimize the leading thermoelectric parameters of TEGs such as the electrical conductivity or the Seebeck coefficient. Carrying-out these studies on single crystals composed of radical ions or polyaromatic hydrocarbons as well as on thin films made of molecular and polymeric semiconductors, we are able to deduce the microscopic relations between band filling, electrical conductivity and Seebeck coefficient. Making use of the low thermal conductivity generic to van-der-Waals bound organic systems in combination with the superior charge transport in long-range ordered single crystals we has succeeded in protypical all organic TEGs of promising specific power output [1]. Moreover, electronic correlations in low-dimensional organic metals lift the restriction imposed by the Wiedemann-Franz law on the independent optimization of electrical and thermal conductivity. Together with the strong electron-phonon coupling [2] and its related phonon-drag effects at low temperatures this leads to a significant enhancement of the Seebeck coefficient and thus of the figure-of-merit of the organic TEGs.

Understanding the underlying physical processes of doping, carrier and heat transport on a microscopic level, which we achieve in tight collaboration with theory [3], opens possibilities to affect and optimize the individual thermoelectric measures by novel device concepts based on multi-compound organic hybrid materials or nanostructured surfaces.

If you are interested in a specific topic of our research or are looking for a bachelor or master thesis in this emerging field feel free to contact Maximilian Frank or Marie Siegert and for general inquiries Prof. Jens Pflaum.

[3]     Thermoelectric Properties of Nanostructured Tetrathiotetracene Iodide Crystals in a Two-Dimensional Model
Sanduleac I, Casian A and Pflaum J (2014). JOURNAL OF NANOELECTRONICS AND OPTOELECTRONICS. 9(2), 247-252.